Showing more woof than Warrior (2011, O'Connor), London's hard-hitting actor recently showed a soft spot for Battersea Dogs Home in an online clip that quickly went viral. The star seemed to be in his element as he sat on the floor and introduced several pets in need of rehoming. While his upcoming hit Venom (2018, Marvel) has no time for sweetness, Hardy's canine company reminded me of an underrated film that deserves to be adopted; The Drop (2014, Roskam). 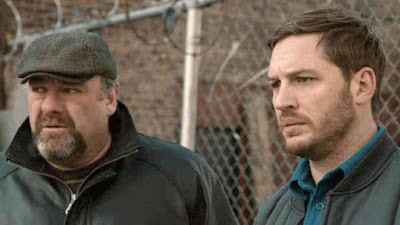 Whilst the image of a chiselled male lead nursing a puppy might befit the pages of Tom Hardy’s little-mentioned modelling portfolio, hushed neo-noir The Drop (2014, Roskam) is all bite and no bark. Emerging from novelist Dennis Lehane, who has authored such suspenseful triumphs as Mystic River (2003) and Shutter Island (2010), the film presents an understated tale of violence and unsettled faith – a mood which stays close to the heels of its master. Set shortly after the festive period in a tense Brooklyn neighbourhood, it follows unassuming bartender Bob Saginowski (Tom Hardy); a quiet, oft turtle-necked man who takes care of the local drop bar and the vulnerable people who are burdened by its activities. Although Bob’s endearing decency is first grazed by the salvaging of an abused pit bull and the assistance of nearby resident Nadia (Noomi Rapace), meek proves to have teeth in this intriguing feature. 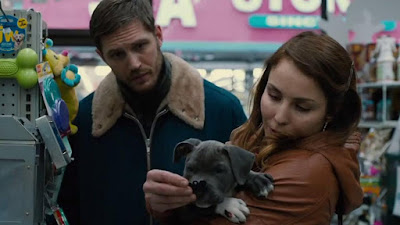 Under the watchful eye of Marvin Stipler (James Gandolfini), Cousin Marv’s is maintained as an unofficial venue for city-wide money laundering - a function which is infiltrated by rival mobsters. While Bob’s moral approval is kept off the table, his hands are regularly engaged underneath the place mats. From this vantage point, the bar’s hidden shoots and safe mechanisms are exposed and navigated via stylish tracking sequences and claustrophobic framing. The detached nightly rhythm of this environment is offset by the morning mass service, during which Bob has routine encounters with a suspecting federal investigator and a religious figurine. Named in tribute to the latter, neglected puppy Rocco is salvaged from the domestic rubbish cans outside Nadia’s home - a somewhat gory discovery which yields impassioned responses from an otherwise introverted pair. While they initially bond over chew toys, Rocco proves to be as much a product of ambiguous past troubles as he is an affectionate addition to a hopeful future worthy of protection. Harassed by a possessive ex-boyfriend and strained kin relations, Bob’s practicality waxes as his patience wanes. 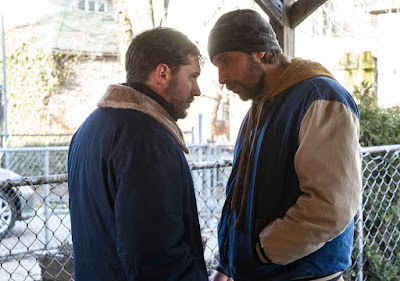 Lending from the fatherly neon hues of Drive’s (2011, Refn) Ryan Gosling and the folksy bleakness of Fargo (1996, Coen), The Drop (2014, Roskam) gropes in the dark for a semblance of family in a place where seasonal tinsel is reserved for window displays and makeshift appendage bags. Boasting a molasses-like script that passes with equal sweetness and dread, the film is generous in its distribution of witty dialogue amongst characters great and small. This establishes a level of appreciation and sharpness onto protagonists whose backstories are minimally indulged. Beyond the steady plummeting of New York temperatures and incriminating packages, the word ‘drop’ brings to mind many things - fluidity, release, descent and surrender. Whilst the gesture of throwing is often pronounced and pre-meditated, the act of dropping may easily be missed and difficult to account for. Accordingly, I skimmed past The Drop (2014, Roskam) countless times before deciding to view it. Perhaps it is safe to conclude that, like the film’s opening sheen of puddles, still waters run deep.