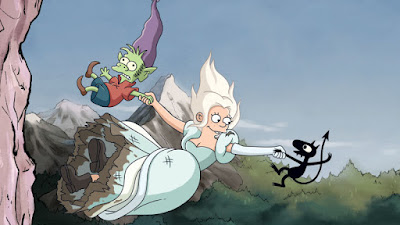 A world of medieval muck and rowdy antics stakes its claim on Ye Olde Netflix as Matt Groening’s latest TV series Disenchantment (Groening, 2018) finds its glory; living-proof that the imagination of The Simpsons (Groening, 1987-) creator is far from antiquing. Set in Dreamland, the story follows the wilful Princess Bean as she fights for her independence in a kingdom tyrannised by a stout, red-headed leader with a major PR problem (sound familiar?). Aided by gullible side-kick Elfo and a cigarette-puffing demon, she flees an arranged marriage and steers her life down a wacky course of misadventures and bizarre fantasies. With enough of the "inconceivable" to rival The Princess Bride (Reiner, 1987), this makes for a wild ride. 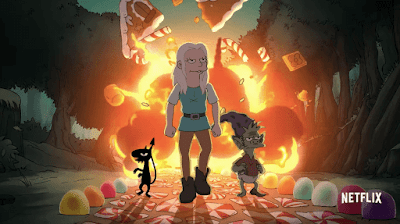 While dictionaries describe it as the feeling of being let down by a former champion, Disenchantment (Groening, 2018) exceeds expectations. The show is like an unsupervised match of Dungeons & Dragons that turns into a drinking game; crowded with innuendoes, comic violence and Groening's signature absurdism continued from The Simpsons (1989-) and Futurama (1999-2013). It also echoes contemporaries like Adventure Time (Ward, 2010-) and classics like Monty Python and the Holy Grail (Gilliam, 1975) Situating itself in a crazy but relatable world, the show makes clear links between an imagined land and real-life administrations by giving its Trump-style King an hourglass alien wife, a mop-haired Prince and crumbing alliances. Turning current anxieties into something laughable, it achieves impressive results. 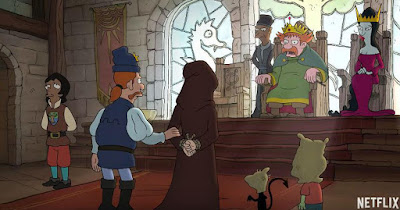 No dance for the sensitive folk, Disenchantment (Groening, 2018) skips its Elf shoes through dismembered townships and bloody bodies in keeping with comic violence trends. Sometimes this elicits a chuckle while other times it seems like a cheap gag that distracts from the show's more advanced comedy skills. In this area, the funniest thing is how much animation can get away with these days. However, Disenchantment (2018) makes many thoughtful jests at everything from gender equality to class and religion; finding buffoonery in the powerful and wisdom in the humble. While it is a thoroughly mixed bag, its unadulterated hilarity casts a powerful spell. 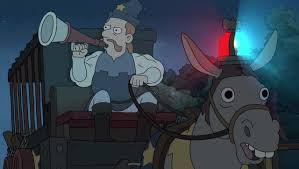