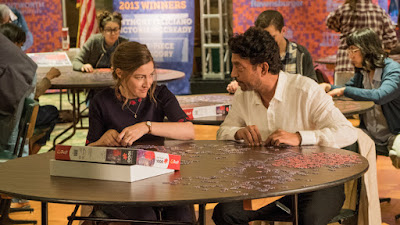 Re-arranging a muddled family life one piece at a time, Turtletaub's playful drama Puzzle (2018) follows mousey housewife Agnes (Kelly McDonald) as her flair for jigsaw-solving leads her to contemplate the bigger picture. Struggling with a mismatched husband and two college-aged sons facing their own challenges, she finds unlikely escape in the form of a birthday toy that she traces back to a quirky shop in New York City – just a train ride away from her Suburban home. After noting the contact details of a mystery puzzle enthusiast advertised there, she meets the charming and eccentric Robert (Irrfan Khan): a competitive jigsaw mogul who hopes to collaborate with her for an upcoming tournament. As Agnes’ confidence slowly grows, an otherwise drab weekly routine takes on new colours and inspires her to finally think outside of the box.

Through the stuffy 1970s textiles and dated fittings that decorate Agnes’ house and the almost too cosy sweaters that surround her torso, the film establishes her home as a nest of outlasted comforts. She holds her “little pocket alien” iPhone 6 like a calculator for inputting complicated sums and counts down her husband’s morning routine to the second. While his dark and cluttered mechanic’s studio is a territory she rarely ventures, weekly visits to Robert’s affluent city home offer spacious rooms, sleek furnishings and gold-trimmed ethnic prints that help her rediscover her own roots. A particularly moving example of this is when Robert pronounces Agnes’ name in its original way, as opposed to the American drawl. Instrumentals are often subtle while the camera follows its female lead’s every move and comment with hopeful anticipation. 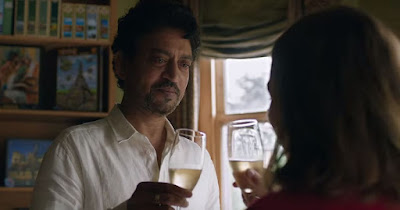 Although Puzzle (2018) makes an uplifting premiere at this year’s Edinburgh International Film Festival, it does so while approaching some challenging themes. Issues of adultery, mothering, self-esteem and, most significantly, gender inequality are taken on the nose every time Agnes’ newfound ambitions are dismissed as “cute” by her husband. Thankfully, this attitude is also reflexive and defends her eldest son when his career goals are deflated for being too “womanly”. Unlike the painstaking task of assembling 1,000 pieces into a single whole, Puzzle (2018) accepts that not everything in life fits. With optimism, it looks for solutions in ways that are far more pleasing than pedantic; efforts that create a lovely and understated film. 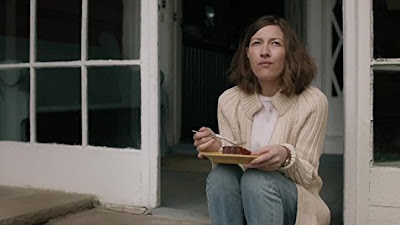