Sexing and Arresting: Ahead of Gerald's Game (2017)

Bedposts rattle with cuffed wrists as the left hand supports a diamond ring that twinkles in disaster; Horror royalty Stephen King is back to set the score against gender inequality in Gerald’s Game. While wife Jessie (Carla Gugino) worries over a hungry stray dog, husband Gerald (Bruce Greenwood) schemes to put some kinks back into their well-ironed marriage as they leave town for a romantic weekend. Soon, the slip that begins as an ivory, lace nightdress descends into abusive territory and a forced sexual fantasy that is only put to rest when a sudden stroke sends Gerald’s lifeless body toppling. Struggling out from underneath him, the handcuffed Jessie is left with little time to escape mortal threat and unspoken traumas of the past.

Cleverly cast, Gerald’s Game pairs the power images of Gugino (famous as the kick-butt mother to the Spy Kids family) and Greenwood (known for his Presidential roles in films such as Thirteen Days). Sharp words are exchanged between parties as Jessie’s hallucinations bring the lessons of a failed marriage to life while she summons up her energy as a lone survivor. With days fading to nights, the simple bedroom soon rustles with strange phantoms and creepy distortions as the story seeps on. For as long as her hands are tied, we are left biting our nails. 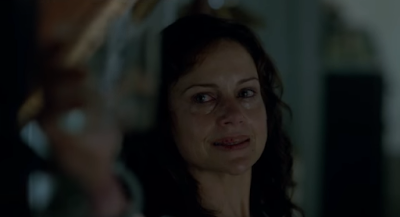 However, a turn-around arrives with gatherings of previously silenced voices that echo the #MeToo movement. Here, the otherwise surreal story of woman vs. boogieman is grounded in contexts of assault that are both maddeningly familiar and increasingly intolerable in today’s world. Perhaps King’s most arresting critique of misogyny since his breakthrough hit Carrie, Gerald’s Game quizzes the question that a begging Jessie later obliterates: “Is this really what it takes these days?” 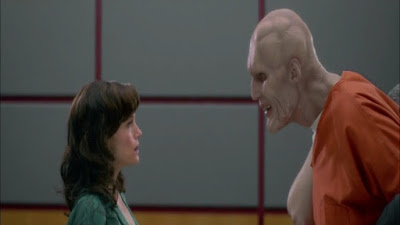