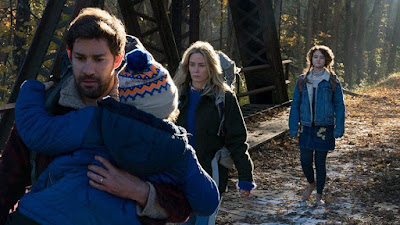 With actor John Krasinski wearing the director cap and Emily Blunt trading in her Devil Wears Prada stilettos for maternity dungarees, A Quiet Place casts the Hollywood couple as parents of a barefooted family that must tread lightly through a world of sound-dependant predators. After a tragic misstep leads to the loss of a son, father Lee (Kransinski) labours to protect his wife and remaining children; including an anxious boy and a daughter who struggles to adjust to her recent deaf status. As mute tempers flare and gaunt, rippling monsters threaten to swarm at the drop of a tack, heavily pregnant mother Evelyn (Blunt) is tasked with a noiseless home birth that brings a whole new meaning to phrase baby shower. 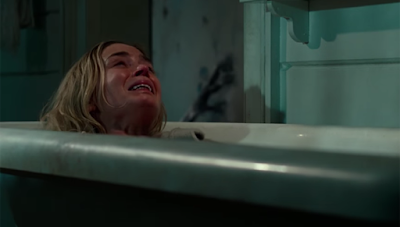 Although the film has rightly been promoted as horror and sci-fi, there are strong notes of Western to be found in the raiding of ghost-towns, rickety wooden outhouses, striding gunslingers and dusty homeward paths. Threaded throughout is the idea of living-off-the-land...hunting by wide rivers and harvesting grain from cornfields. While technology is ultimately what saves the family from their enemies, it is given a rustic feel via repeated shots of Lee making his devices by hand in a dimly lit basement. As darkness burrows through, tight frames and stomach lurching sound effects make even the widest fields and forests veer off towards cabin fever. Add to this an innovative wall of barely-there dialogue and what remains is often electrifying.

Critically speaking, the Stranger Things style monsters could have been approached with greater build-up, but they are instead introduced with the enigma of a cannon blast within the first ten minutes of run-time. Rather than playing on our imagination, the film shows its hand early in the game - perhaps at the expense of optimal suspense. On top of this, stacks of dubious questions make it possible for audiences to scrape back the tension and serve it on hot toast. For example, could a family that faces imminent death with every kerfuffle really be so butterfingered? How likely is it that a baby could be conceived in utter silence, nevermind delivered? While shushing with more brilliance than a seasoned librarian, A Quiet Place risks blowing its own trumpet as it gives viewers the silent treatment. 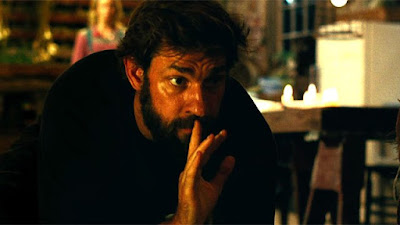