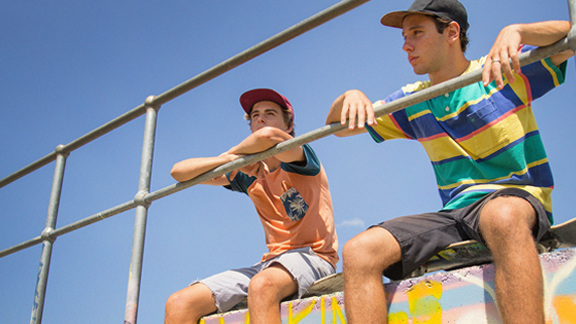 [EIFF The Young and The Wild Shorts Category]
Is film something you have studied?
Lee: “Yeah, I did study film at the Australian Film and Television School – Film, Radio and Television School - in Sydney.”
Did you focus on the theory or have you always been interested in filmmaking?
“Interesting question [pauses]. Both. I really like both but I love being on set because originally I’m a production designer. I studied design and then worked for like seven years as a student and then moved into professional. And then I did post-grad school when I was twenty-six and then screen direction and drama. But yeah, my route into film was through production design.”
After watching Melon Grab I looked into your previous film Erik (2013) and I was really interested in this theme of young men who are negotiating their feelings. Why that is important to you? What draws you to it?
“That’s very observant. Why am I drawn to it? I think – I was talking to my friends about how much I grew up with just boys around me. I went to an all-boys school. I was in the air cadets. I was in the choir. I was an altar boy. I was just always around boys even though I grew up in a whole family of females. And I always found that with my friends in Australia and Korea, we never really expressed ourselves. We always did it in another way. I’ve always found it interesting the way that guys communicate with each other. So for instance in Melon Grab, it’s kind of like they don’t really talk about their emotions. They goof about and that’s how they communicate comfort. The communication is just held back…we try not to show too much emotion, but we do it from physicality.”
And do you have personal experience with skateboarding?
“Yes, I do skateboard. I picked it up again during filming. I was a skateboarder in the 1980s, which is a little while back now.”
I suppose there’s quite a lot of precision involved with skateboarding. Was there room for any freestyling (like the kind we see in the rap scenes) in your approach or was the filming quite contained?
“It was a combination. They [lead actors Noah Fuzi and Noah Ragan] knew the beats from the script. The dialogue was sort of scripted but then they could go off. ‘This section is talking about your first girlfriend or first breakup’. I gave a general guideline and then they would flourish, go off on it and talk about their real first girlfriends or real breakups. As with the skating. The skating was all improvised. We would give them a location and they would look at it and decide what we were going to do. We would skate-and-film, skate-and-film very quickly with the sun going down. So it was a lot of fun – we did lot of skating!”
Yeah, I like how the sun is kind of friendly and shining down on them, but it’s also ticking down to the end of that time.
“Lovely. Yeah, that’s exactly right. The sun is going down and it’s kind of like this last moment. You guys are really observant. What is it that you hope to do? ”
Mainly screenwriting but I also do music so I’d like to write scores for films as well.  How did you approach your music here?
“Awesome. Awesome. Well something interesting – this film was developed with the score being written at the same time. So originally I did a residency and I pitched this film in France and then it got funding and the project was to write the film while you were writing the music. I was assigned to compose it. The film is very musical.  I am kind of surprised I’m here because it’s an unorthodox method. We’re writing the script with music and the skating… 80% of it is skating [laughs].”
Did you find that writing the script was tricky when you had such long intervals of skating?
“No. The writing is really simple. There are emotional bits where I just want to talk about key areas and build up a relationship and see them [best friends] start to lose this warm thing. I mean, the writing is not that complex. It’s kind of just making people feel certain things at certain times. And everyone just swims in that emotion with the imagery and the music.”
Yeah, I see how that focus comes across. Do you hope to do feature-length films in the future or do you quite enjoy these shorts?
“I want to do a longer format definitely. I’ll probably have to do one more more-traditional story (three-act structure inside an incident which involves a heroes’ journey) and then tackle the feature film.
I’ve made a lot of shots [laughs].”