Far from the outskirts, McDonagh’s fiercely scripted and directed Three Billboards Outside Ebbing, Missouri (2018) presents a story that is painfully close to home in light of contemporary headlines. In its tale, undeterred mother Mildred (Frances McDormand) rents a trio of deserted roadside pitches and directs a harrowing message towards the county police. Here, she singles out terminally ill Officer Whelan (Woody Harrelson) for neglecting the unsolved rape and murder of her teenage daughter. Troubled by the ethics of her decision to hold a dying man accountable, local news travels fast until the towering posters are covered by broadcasters as a topic of controversy. Burdened by financial hardship, physical violence and long-standing family crises, Mildred encounters a world of oppression in a small town. Starting with the vacant space of a rarely driven route, the film ventures off the map into realms of rage, social injustice and loss that prove far more overwhelming than badges and guns.

A down-and-out location, Ebbing is conveyed as an environment that is both touristy and grim; like a decorative plaster over a serious wound. The sets seem unusually nostalgic, with wood panelled cars, dated computers and flip phones to boot. In venues ranging from kitsch souvenir shops to traditional bars, recurring images of U.S flags ponder a sense of lost pride and purpose in ever drooping positions. Along this vein, there are faint echoes of Western rivalry in the peeking blinds of neighbouring police and business headquarters. The constant threat of attack comes to inform the exchanges between characters – from food fights and cutting words to severe bloodshed. All the while, panoramic shots of surrounding woodlands attest to a harmony that is out of reach, as invasive close-ups survey McDormand’s face as a hazardous landscape of emotion. 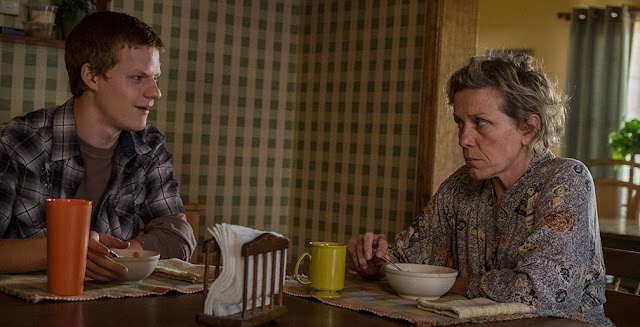 Laden with raw outbursts, well-timed quips and drowsy Southern drawls, Three Billboards (2018) sustains a genuine rhythm and dialogue that speaks volumes. Although it does not make a direct appearance in the film, the knuckle-down saying get ‘er done comes to mind as a phrase which puts productivity and female will side by side. While the feature reflects on crimes against women (as well as on issues of racism and homophobia), it also observes crimes committed by women in retaliation and solidarity. At times, I found that the film missed some opportunities to empathise with Y-chromosomes - particularly Mildred’s high school son in the wake of his sister’s death and mother’s increasingly radical behaviour. Beyond this small criticism, Three Billboards (2018) remains a moral heavyweight of a film; its unique selling point is that it cannot take us where we want to go. 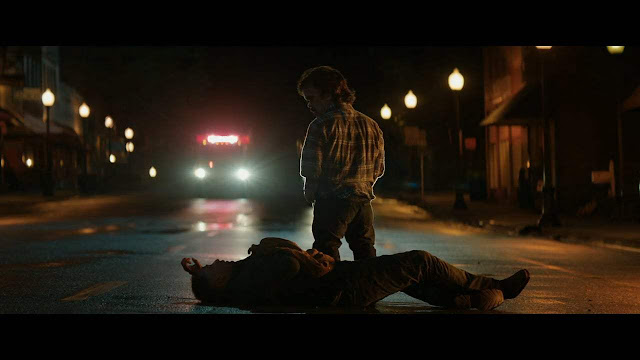