Shining light on a nameless teenage intellect of uncommon gifting, The Erlprince (2017) reigns over two upcoming events; the European Science Awards and (more pressingly) the end of the world. As the latest feature to emerge from rising Polish director Kuba Czekaj, the film follows a boy-genius as he fights to stay afloat amidst the demands of a prickly mother known as The Woman (Agnieszka Podsiadlik) and the rumoured Armageddon. Calculating deep, existential worries that render high school popularity a smudge on a fading horizon, The Boy (Staszek Cywka) pursues libido-filled fantasies and theories of dimension travel. However, urgent perspective arrives in the form of newly involved father The Man (Sebastian Lach) and his pack of wild dogs. Beyond the protégée’s confused adolescent life lies a strange world of cultish folklore and haunting final days. 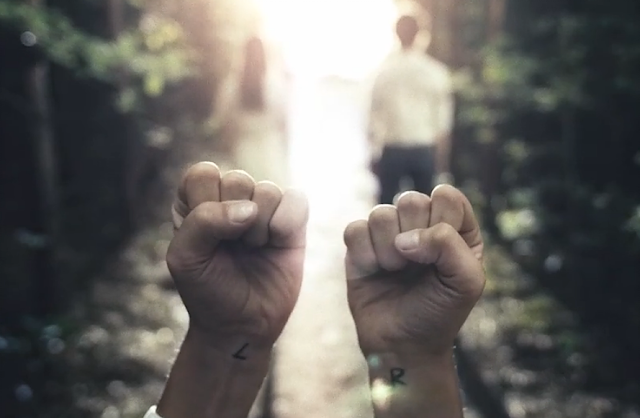 Perhaps too ambiguous and pagan to qualify as sci-fi, the film is rooted in the verses of German poet Goethe; ‘The father it is, with his infant so dear.’ Exploring themes of paternal influence and awakening sexuality, The Erlprince  (2017) tracks its vast locations in slow motion– from underwater forests to blood-drenched wolf feeding grounds. Sullying the conservative halls of schools and science labs, its sterile linoleum floors host soil-covered seductions in the blink of an eye. Meanwhile, home dysfunctions are explored with childhood dress-up costumes and disorienting strobe lighting; elegantly stuttering from domestic spaces to the world beyond.  Its inventive score is just as transient and moves between echoed vocals, classical piano and death metal. Overall, these audio-visual elements combine to create an ambient video-game effect comparable to the Silent Hill franchise. Tonally, it recalls the teen angst of Donnie Darko.

While its multi-lingual dialogue (German, Polish and English) is an impressive approach to story-telling, the core message of the feature risks getting lost in translation. Furthermore, its characters are prone to strange sayings and sudden outbursts that are at times enough to challenge even the most patient of audience members.  Playfully shrugging its shoulders at all questions of clarity, the film presents a bold and self-assured front that reflects the regal undertones of its name. However, The Erlprince (2017) is strikingly consistent in its experimental mission. A rich and unexpectedly endearing feature, it bears its crest well.